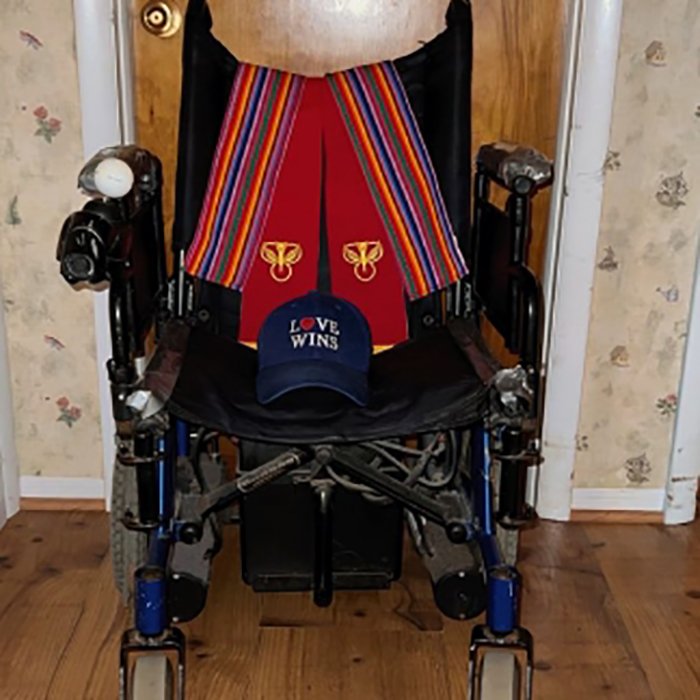 The challenge of cerebral palsy never prevented the Reverend Chris Wylie from realizing his dreams. His faith helped to reveal God’s gifts throughout his life.

The longtime banker, in his mid-30s, felt the call for service. Chris said, “All I knew was that I had to go to this place called the seminary as a first step.”

After becoming ordained and pastoring in many churches at the Upper New York Conference, Chris had to go on disability leave in 2016. His limitations regarding cerebral palsy have been exacerbated by a failed knee replacement surgery.

Reverend Dave Masland, former director of the New Faith Communities of Upper New York, said: “From the moment I met Chris, his heart and mind were filled with a sense that God was calling him to find new ways to reach people with good news of God’s love. , and change the Church (or create a new church) so that it is truly a safe place of accessibility and inclusion for all people regardless of the bodies in which they live. He was a gifted pastor. But his body simply did not allow him to continue the daily life of a typical full-time religious priest. Although his body limited his ability to work full time as a pastor, his mind and spirit were still alive with dreams and visions. ”

Chris had to change his speed and he wasn’t quite sure how until God jumped in to start creating Chris’ new direction – music.

Waiting for the door to open (literally and figuratively) at Sam Baker’s concert in November 2019, Sam approached Chris.

They began a lively conversation about their limitations (Sam lost the use of his fingers and suffered a brain injury when a terrorist group bomb exploded while driving a train in Manchu Picchu in 1986).

Sam and Chris started a strong friendship and stayed in touch with each other.

In December 2019, Chris attended the Aquabats concert in Buffalo. The band’s frontman, the rapper, MC Lars, approached Chris and thanked him for coming. Chris was particularly impressed with Lars ’skill of improvisation.

Chris said: “In the end, I talked to Lars during the break – he was at his table for selling goods. He asked me what I was doing, and I told him I was a pastor. He said, ‘You are a pastor? I want to know more about it. He gave me his card and asked me to call him. “

Lars also gave advice: “Write about what you know.”

By February 2020, with the help of his new professional music friends Sam and Lars and his tech-savvy wife Jennelle Torrey, Chris will start writing lyrics and creating music using Logic Pro. ”

The COVID pandemic began the following month, but that didn’t stop Chris.

Reverend Masland said: “Kovid created a space for Chris’ love for music to come to the surface for the first time in many years. Suddenly, God seemed to be opening the door. ”

Chris hired an online voice trainer from Toronto, professional singer Jill Zadeh, who left the tour to spend time with her first child. Chris was her first online student.

Like the relationships Chris established with Sam and Lars, Jill was a gift from God.

Lars began assisting Chris in producing his first album with 10 selected songs ranging from folk to rap genres, including a song titled Rolling Nation, on which Lars performs the second verse.

While Chris was producing the album, he was also looking for a wheelchair access van. He went to the van dealership – the van alone cost thirty-six thousand dollars, and in order to be accessible for wheelchairs, the cost was an additional fourteen thousand dollars. Chris has found that many other adaptations can cost even more, sometimes twice as much as the price of the original vehicle

This exorbitant expense touched Chris’ heart — and so began the service of the Rolling Nation. This is a community connection fund set up to help people get wheelchair-adapted vehicles and offer new music at the same time.

With each contribution to the fund, Chris offers a copy of his new album. All proceeds go to help people at the expense of wheelchair-adapted vehicles.

The dealership where Chris bought his van sends Chris recommendations.

Chris said: “This MP will inform their connections across the state about this fund. I hope this will become an initiative across the country. I just want to continue to develop this ministry and give grants to those who need it. “

Laurel O’Conner, assistant pastor for faith and action and the Central United Methodist Church in Endicott, NY and founder of Affirm Fundraising, began working with Chris in the fall of 2021 to help launch the Rolling Nation Fund.

Laurel said: “God created people to be free. Chris talks about how wheelchair-accessible vehicles help people like him to be free – to provide incredible independence. Chris’ ministry is to enable people to be what God created them to be. ”

Laurel continued: “Chris’ dream is to bring accessibility to the mainstream” – it was never about him.

Chris’ album was not the end point. That is the starting point for this ministry. Now it is building momentum. Producing an album from your home and launching this fund shows how the pandemic has unlocked the possibilities. Even when you can’t leave your home, your voice can resonate throughout the universe! ”

Chris hopes this ministry will grow as well. “The more we gather, the more people we help,” he said.

Chris continued: “This album has been in the making for 30 years. I’ve wanted to do this since I was 20. God needs to be involved because there is no way I could do this without all the connections God has brought into my life. Dreams come true by surrendering and surrendering to God. You have to believe that love is greater than all the bad things in the world. ”

All the songs on Chris ’album show his enthusiasm, passion and positivity. For example, his song, Make it nice, eloquently says “Give everyone you meet something they will believe in; let it be beautiful, brilliantly brilliant. Let it be beautiful; everything will be fine.”

Click here to learn more about Chris’ service and album.

Shannon Hodson is Director of Communications for the Upper New York Annual Conference. This article has been republished with the permission of the conference website.