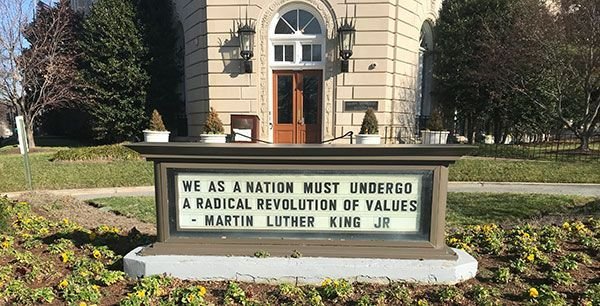 From a decade away, Insight’s existence still seems miraculous. So many currents merged in his creation: the disappearance of The Progressive Christian magazine (formerly Zion’s Herald) which left me without a job; a caring phone call from a longtime friend and benefactor concerned about my unemployment; several social media interviews with United Methodists who feel excluded from General Conference discussions on the future of denomination; the emergence of a user-friendly content management system that allowed one person to publish a credible online journal.

The strongest motivation to find Insight remains at the core of his mission: to provide an open forum for United Methodists to share their thoughts and perceptions of where God might call the denomination to go. That overall mission has intensified over the past 10 years to be particularly open to ideas from the margins of the church, no matter how heretical or blasphemous those ideas may seem to others, especially those in power.

Striving for a noble goal

The pursuit of a noble purpose, like the one that energized my parents ’generation, went out of fashion during my 50 years as a journalist. For a while, some people mocked or even ridiculed the slightest hint that some value other than their own benefit motivated the venture. however United Methodist Insight it is based on the principle that my journalism mentor taught me, that people, not the powerful, deserve unhindered access to today’s media.

Here I admit it Insight’s Openness to marginal expressions that often irritate readers stems directly from my formation and experience as an “old school” journalist. I recently came across a quote that aptly describes my view of journalism as a public service-oriented occupation:

“The basic role of journalists in a democracy is to hold those in power, especially those in government, responsible. But if they have close relationships with those in power, their independence, or at least perception of it, may be compromised. Independence, together with accountability and transparency, support public confidence in journalists. ”

Looking back on the past decade, I celebrate many times Insight’s through voluntary associates he reached this mark. I think and tremble even in moments when, as an editor, I failed to hit this target, mostly because of what I can only describe as a passion for justice that the prophet Jeremiah said, “burns like fire in the bones.” I am credited with the great prophets of my Judeo-Christian faith, especially Jesus, for this “fire in the bones” that can infect me with reckless zeal, but lifts me up again when I stumble and fall. As scientist Obery Hendricks Jr. writes in his new book, “Christians Against Christianity: How Right-Wing Evangelicals Destroy Our Nation and Our Faith,” my life and my calling were shaped by people who practiced two of Jesus ’great teachings: The Great Commandment of Matthew 22: 37-39 and Matthew 25: 31-46. The first describes the love we owe to God who first loved us, and the second describes God’s love in the work we call justice.

It is strange to quote Scripture

I guess readers find it strange that a progressive editor quotes the Bible so freely, but those teachings from my childhood and youth are deeply ingrained in my soul. Our evangelical friends have repeatedly accused me of proclaiming blasphemy and devilishly quoting Scripture for my own evil purposes. However, in this time of chaos and confusion, at least one thing has become completely clear in the United States: Christianity has been kidnapped by the forces that hold most to the very values ​​that Jesus explicitly condemned in his preaching and teaching, and this corruption. it must be called out and resisted at every turn.

Above all, the strengthening of Christian love and justice – beyond even the great gifts of practical spirituality from our Wesleyan tradition – was the intention United Methodist Insight. As one of my favorite historical women, Elizabeth I of England, reportedly said, “There is only one Jesus Christ; everything else is disputes over trifles. ”

This commitment is often found Insight and its editor receives thorns and sticks from those who disagree with our content and editorial views. Some of the criticisms were justified, and I apologize for those mistakes, but most of the criticisms were “disputes over trifles”, and unfortunately a vicious quarrel. I mostly resisted the urge to fight back, as advocated by Mohandas Gandhi and Martin Luther King Jr., but sometimes I failed and I regret those failures. In such painful times, I relied on Jesus’ words in Matthew 5:11: “Blessed are ye, when men shall revile you, and persecute you, and shall say all manner of evil against you falsely, for my sake.” It doesn’t make the pain go away right away, but Jesus ’blessing makes the pain more bearable.

Enduring pain – ours and someone else’s – has proven to be one of the unexpected side effects of publishing United Methodist Insight for a decade. This endurance of pain – this compassion – shows another basic ideal of the Christian faith which the false gospels, hungry for power, reject. Our time shows that both in our church and in our society we are divided into two worlds, one in which power, privilege and money are gods, and the other in which the love and justice exemplified by Jesus Christ form us into a beloved community. . We are at one of those crossroads of history where we have to choose who we will serve, and I swear to that Insight he will continue to serve God as long as I am his editor.

Such was life United Methodist Insight the last 10 years – a place of openness for those who are ready to get involved in the struggle to know “a reality that transcends all other realities”, as one colleague said. Starting the new year, we can only see enough light for one more step, but we are taking that step confidently – “with faith”In Latin, which means“ with faith ”. I urge everyone to set out, confident in the psalmist’s promise:

Cynthia B. Astle is the editor of United Methodist Insight, which she founded in December 2011.

* New Revised Standard Version of the Bible, Copyright © 1989, 1995. National Council of Churches of Christ in the United States. Used with permission. All rights reserved worldwide. http://nrsvbibles.org