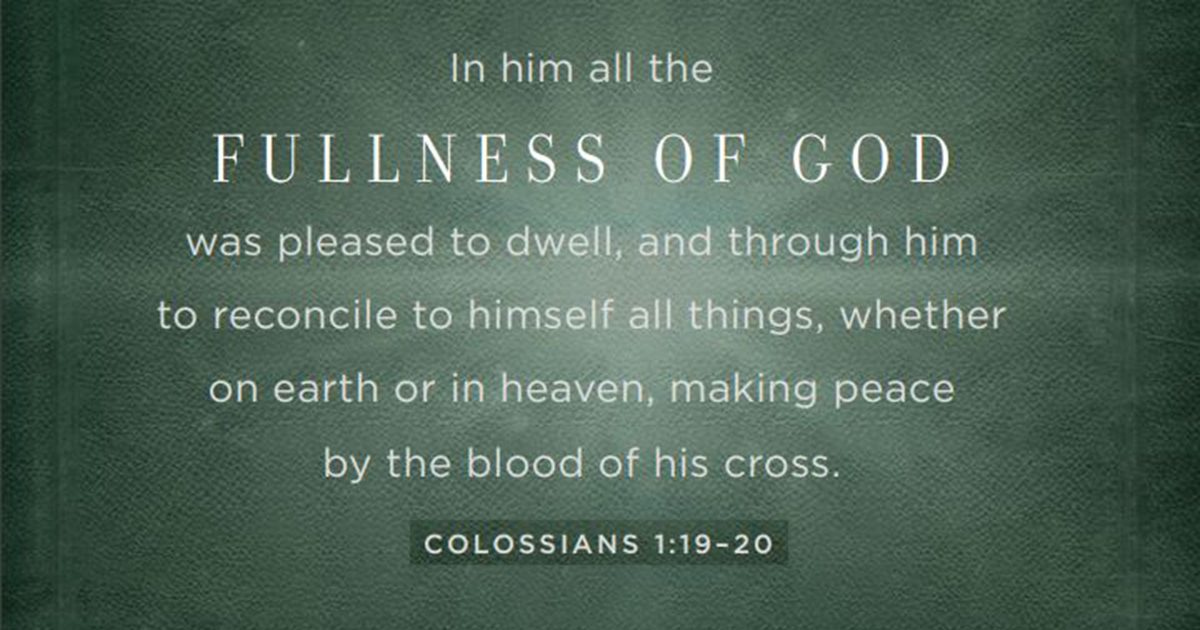 Read week 1 and week 2 from the pious work of Franklin Graham, The greatest rescue mission.

“He delivered us from the realm of darkness and transferred us to the kingdom of his beloved Son, in whom we have redemption, the remission of sins. He is the image of the invisible God, the firstborn of all creation. For through him all things were created, in heaven and on earth, visible and invisible, whether thrones or lordships, whether rulers or authorities – everything was created through him and for him.

“And he is above all, and in him everything sticks together. And he is the head of the body, the church. He is the beginning, the firstborn from the dead, to be superior in everything. For in him the fullness of God pleased to dwell, and through him to reconcile with himself all things, whether on earth or in heaven, making peace with the blood of his cross.

“And you, who were once alienated and hostile, committing evil deeds, he has now reconciled with his death in his body, in order to present you holy and flawless and flawless before you.

AFTER ADAM and Eve listened to the lies of the serpent and disobeyed God, the first prophecy of Jesus Christ appears in Scripture. The Lord cursed the serpent, saying that the woman’s offspring would “crush your head” —but then, showing the great price He Himself would bear, He said to the enemy, “You will bend his heel” (Genesis 3:15).

The shadow of the cross was cast in the Garden of Eden. At that moment, God warned Satan that although he would be allowed to crush Christ’s heel – which was about the crucifixion – Jesus would crush his head. By his resurrection he would deal a mortal blow to power and the curse of the devil, sin and death. The Christmas miracle culminates with the victory of Easter.

“And being found in human form, he humbled himself by being obedient to death, even death on the cross” (Philippians 2: 8). God sent His Son to live a sinless life and to die the death our sin deserved. The uneven cross on Golgotha ​​was a punishment for criminals, but the sinless Lord of the Universe allowed him to be crucified there instead of us. He willingly bore the sin of the world upon Himself and shed His blood so that our relationship with Him could be renewed.

The crime of sin and its destructive forces could not prevent God from creating a way to bring salvation to his people. This Christmas season, take the time to thank the Lord for this amazing gift— “redemption through his blood, forgiveness of our transgressions, according to the riches of his grace” (Ephesians 1: 7).

PRAYER: Father, thank You for sending your Son on Christmas to bear my sin on the cross for Easter.